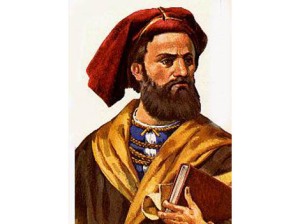 As children, we learned the theory that Marco Polo, the famous Italian explorer who spent 17 years in China before returning to his native land, introduced pasta to Italy.

But the truth is Italians – and all lovers of Italian food – might actually have Arabs to thank for helping to make pasta an Italian culinary staple.

Although the Chinese have been cooking pasta for more than 4,000 years, Italians are more likely to have learned pasta-making techniques from Arabs who settled in the Mediterranean area in the 9th century, more than 300 years before Marco Polo left for his adventure.

Although they may not have invented pasta, no other culture has been as enthusiastic about it. Italians consumer between nearly 77 pounds of pasta per person on average in a single year!

One response to “Pasta and Marco Polo”