One of the best ways for me to learn about other cultures is through cooking classes. I’m lucky that my local community college has a phenomenal culinary arts program and they offer evening cooking classes for those of us eager to taste the world for $65 a class. I figure that by the time I’m able to resume my active travel schedule, I’ll know what to expect – from kimchi to doro wat.

Recently, I took a class on Korean food and it was fantastic. Although I’d eaten at Korean restaurants, I’d never attempted to cook it on my own. After this class, I will definitely be incorporating Korean dishes into my regular rotation.

One of my favorite new recipes was Bim Bim Bap, a dish of beef, chicken, or pork served over a mixture of rice and vegetables topped with a fried egg.

I was thrilled to learn how to make dumplings, too. Mandu dumplings probably came to Korea with the Mongol invasion in the 13th century. Personally, I prefer steamed dumplings, but no matter how you cook them, these dumplings are fantastic. This recipe included pork, tofu, onion, cabbage, and bean noodles. The dipping sauce was made with soy sauce, rice vinegar, sugar, green onions, and sesame seeds. 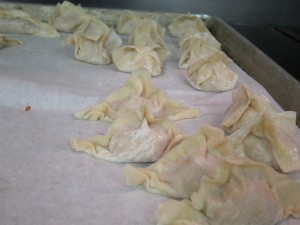 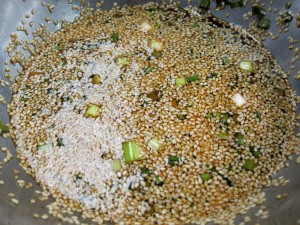 But I also loved Bulgogi, a marinated beef dish that we ate in lettuce wraps. The marinade, which consisted of soy sauce, sugar, green onions, garlic, sesame seeds, sesame oil, and chili paste, was so good I may just coat everything with it in the future! 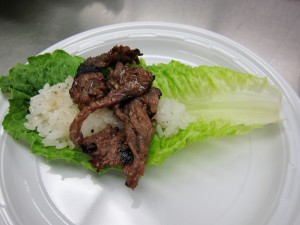 But you can’t enjoy Korean food without kimchi. Ignore everything you’ve heard. If you like spicy food – really, seriously, spicy food – then you have to at least give kimchi a try. Although I don’t imagine I will make it from scratch, I would definitely buy some of this delicious dish to serve with a Korean feast in the future. But unlike many Koreans, I doubt that I’ll be eating it with breakfast! 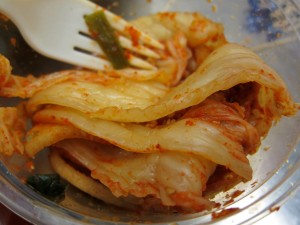 If you’re curious about trying new foods, consider taking a class at your local community college or trying the lunch menu at an ethnic restaurant. You may not love everything you try, but it may be an eye-opening experience that leads you to adopt new favorite foods and learn more about the cultures that created them.

Sometimes you have to eat your way out of your comfort zone.

Tonight I did just that by taking a cooking class on Asian cuisine all by myself. That’s right – no wingman or wing-woman for me!

It was a double dare because I was venturing out of my routine by taking the class in the first place.

Mercifully, the class was a nice blend of veterans and newbies but once Chef started explaining, cutting, mixing, blending, and stirring, all shyness fell away from us.

This dish was cool because I got to see the right way to prepare and fill spring roll wrappers. The first time I used one of these I didn’t soak it in water and it splintered in my hands!

I learned the optimum amount of soaking time is 20 seconds, sparing so much time, effort, aggravation, and failure.

Chef had spread out a whole station of good things to fill the lettuce wraps with so I tried dried shrimp, galangal (it looks like ginger but it has a lemony flavor), and mung bean sprouts.  There’s a picture of the galangal in the gallery below.

A Digression on Fish Sauce – A few weeks ago, I went to the nearby Asian supermarket and bought a bottle of what I call “Smiling Baby Fish Sauce”.

According to Chef, fish sauce is the juice of rotted fish that has been left out in the sun for the purpose of reaping said juices.

Although I strongly believe fish sauce is a critical element in Asian cuisine, it does make me reconsider the “Smiling Baby” brand of fish sauce. There’s something unsavory about that.

This soup was phenomenal and made in under 10 minutes!

It was a brutal competition to win my favorite dish of the evening but the lemongrass soup squeaked out a victory because of its delicious blend of shrimp, lemongrass, and chilies. It was probably a touch too spicy, but that just made me love it more! 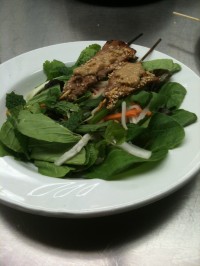 This salad and beef combo had many elements that appealed to me: tender lettuce greens and cabbages, cilantro, mint (REAL mint, Chef assured us), chiles, sesame seeds, lemongrass (my new best friend), and an incredible peanut sauce that incorporated ground pork, peanuts, and fermented soybean paste. Sounds like a winner, right?

After this the class really started to pick up speed and Chef began multi-tasking while a bevy of sous-chefs ran around the kitchen.

Chef had started this dish by soaking, not boiling the rice noodles (which were very thick) in water to soften them.  Late in the preparation, he added them with what looked like baby bok choy but was really something called Shanghai cabbage.

Once again, fermented soybean paste and fish sauce made their appearances but by then we were blase about them both. 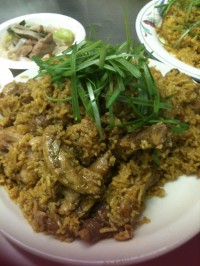 I was anticipating the duck from the moment Chef mentioned it because, although I’ve had it before, it has made such rare appearances on my plate that we are virtual strangers.

However, much as I anticipated the duck, the rice blew it out of the water (with my apologies to ducks).

When he combined this with the duck in a hot, oil-coated pan, the aroma was amazing!

This rice very nearly toppled the Lemongrass Soup as my favorite dish of the night. It made me crave a cooking class just on curries!

Overall, there was such a friendly atmosphere in the class that I would definitely take another one.

Will my son sample any of the recipes I learned to make tonight? Good question; all I can say is that I am working on him.

Here are the delicious photos I took at class tonight (to my classmates’ amusement):