The International Sport of Baseball 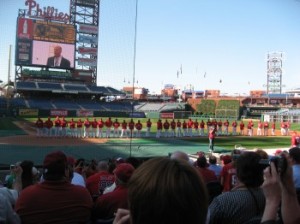 Despite the fact that the “World Series” actually only includes teams from the United States and Canada, baseball itself is an incredibly international sport.

In honor of the opening day of baseball I did a little research on baseball’s global connections and I found out some really cool information.

Since baseball is a sport that loves statistics, here are a few:

The first baseball game played outside the United States was in England but one of the most unique games was probably the one played in front of the Sphinx in Egypt.

Statistics from the Baseball Almanac.

But perhaps nothing accurately captures the spirit of baseball than this quote from Tommy Lasorda:

“For starting pitchers we have two Dominicans, one Italian, one Mexican, and one Japanese. In the bullpen we have a Venezuelan, a Mexican, a guy from the United States, and a guy from St. Louis.”

But no matter where you go in the world, you won’t find a better mascot than the Philly Fanatic.